AUCA Student Lazizjon Abdulazizov visited the Large Aral Sea with the purpose of the data collection for his research. He shared his thoughts about this experience: 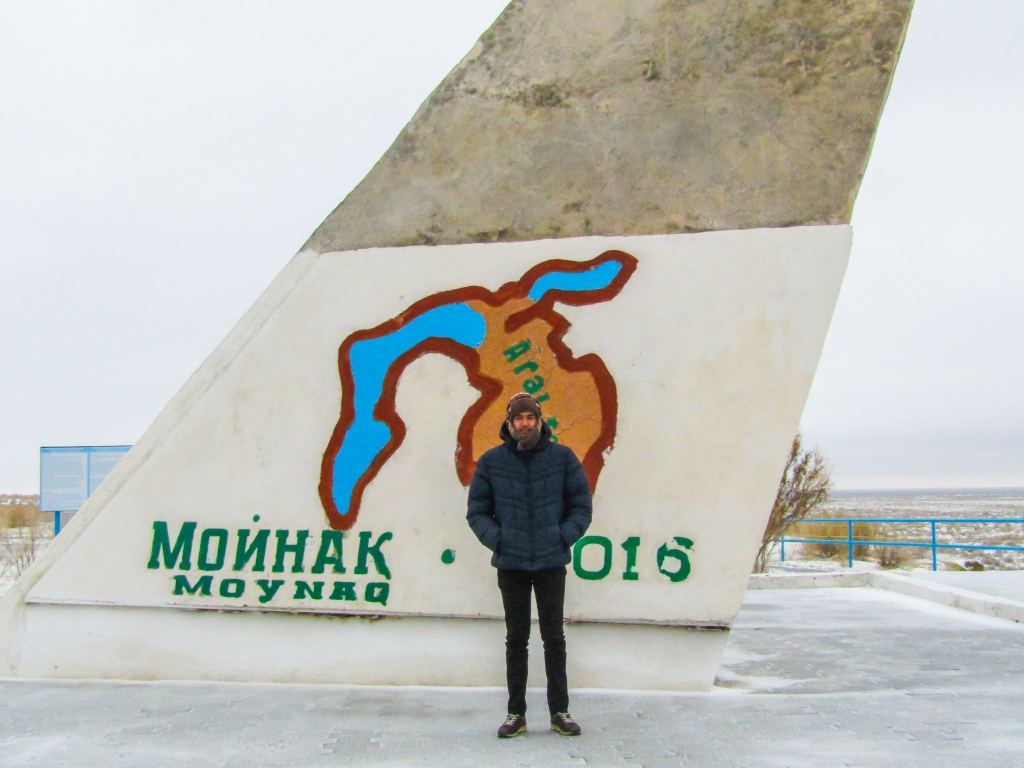 My trip to the Aral Sea took place during the last few days of 2016. The purpose of my visit was to interview locals and research the situation in the region with my own eyes.  The data I collected was supposed to be used for writing my senior thesis—a project related to the rehabilitation of the Aral Sea. I believe I am the first AUCA student to visit the Large Aral Sea located in Uzbekistan. The transportation costs to the former port town of Muynak were covered by SILC (Student Intellectual Life Committee), a group which aims to support AUCA students in conducting research. Unfortunately, due to inclement weather and an absence of drivable roads to the sea, we were unable to reach the existing body of the Western Aral Sea 200 km from Muynak. We were informed that, in the case of a breakdown, there would be no one who would come to our rescue making the possibility of perishing in the middle of nowhere uncomfortably high. As a result, we decided to stay in town and conduct our research there. I was able to interview several people representing different age groups and professions and get to know their attitudes towards the desiccation of the sea. Some of those individuals were lucky enough to have seen the sea many decades ago, while others had only heard stories of a sea full of fish which used to wash the shores of Muynak. For the younger generation those stories seemed to be made up legends rather than fact. 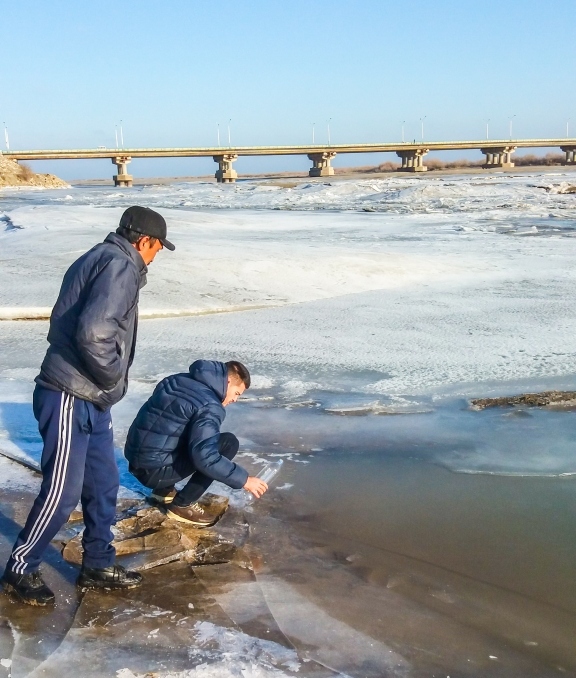 We first visited the lighthouse located on what once was a seashore. Standing there, one sees a desert in place of an endless sea and thinks, “I guess I’d be crazy if I had expected to see the fourth largest sea in the world in the middle of a desert.” There was a large graveyard of abandoned ships. It was ridiculous to see huge fishing vessels in the middle of desert. It reminded me of the movie Pirates of the Caribbean: At World’s End. There was a strong wind which reminded me of the sea, but it was coming from the desert. There were a couple of depression lakes where locals still practice fishing, but obviously incomparable with the former fish production. There, we collected water samples for laboratory analysis. Reaching water in the existing lakes and the Amu river was not an easy task. It was freezing cold and we had to break the ice—a job far more difficult than I had expected. The mixture of wind and cold left us no choice but to return to our hostel. The most interesting moment was when we were complaining to locals about the cold weather. I had an exchange semester in Norway during winter and it was not as cold as it was in Muynak. The locals tried to convince us that it was not cold, that sometimes it even gets twice as cold, something difficult for me to imagine. 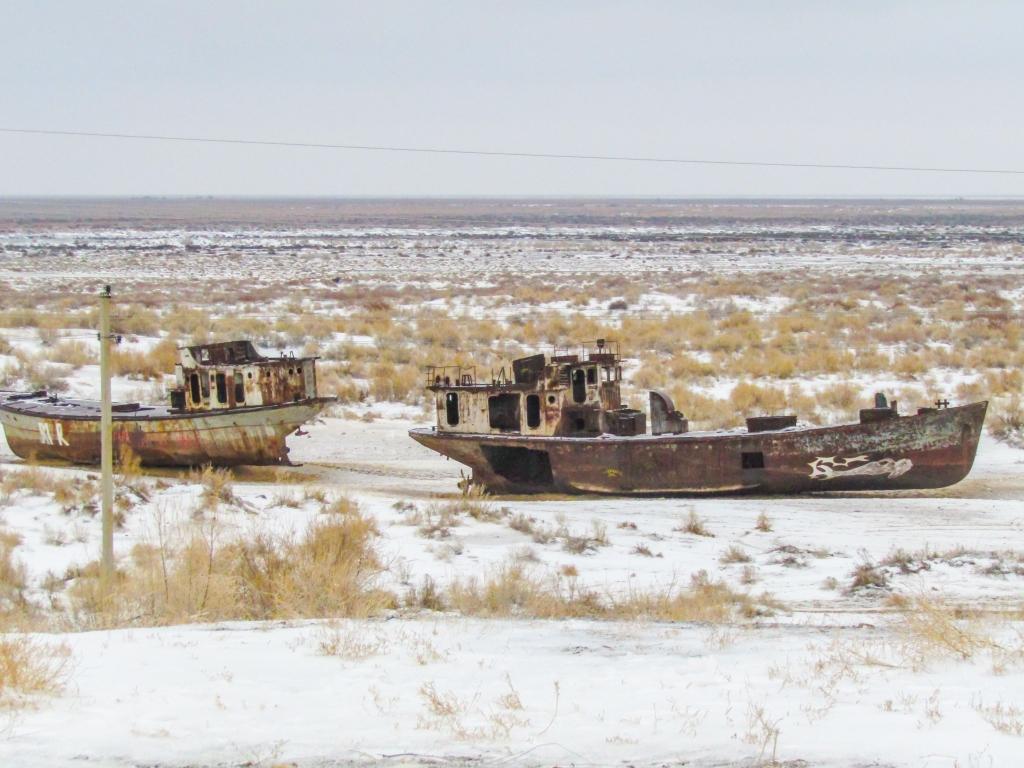 The locals were overwhelmingly friendly and it was not difficult to conduct interviews.  To my question “will the Sea return some day?” they provided both optimistic and rationally pessimistic answers. The most brilliant reply was from an old fisherman who returned to his job after military service to find his sea turned to a desert: “How the sea will return? Will you bring water from the sky?” I was unable to answer to his question.

Additionally, it is important to note that after the collapse of the Soviet Union, research of the Aral Sea has decreased dramatically due to difficulties reaching the sea or lack of funding.  According to a UNDP report, there were only seven research initiatives between 1995- 2005, clearly demonstrating the deficiency of information on the current state of the Aral Sea. Moreover, the Small Aral (Maly Aral), located in Kazakhstan, has been made stable through the Kok-Aral dam, constructed in 2005. The dam has enabled engineers to decrease the salinity level of the Sea and thus bring the fishing industry back. Water samples brought back from the Small Aral by our students will give us an opportunity to compare the differences in water quality on both sides of the Aral Sea. By doing so, we will be able to gather new data for further studies. The Aral Sea problem cannot be solved by political talk alone; quality research is needed to achieve sustainability in the region.

Overall, I believe that my research in the Aral Sea region was successful because I was able to collect relevant and up-to-date data for my diploma. Generally, I have understood that regardless of the pessimism, people still have a hope that the sea will return someday. The research conducted about the current state of the Sea will serve as a cornerstone in solving the Aral Sea crisis. I would like to thank SILC, the LAS-EMSD program, and especially Mamur Saitbaev for supporting me and my research. I hope my work can go on to improve the ecological state of Central Asia.