Bishkek offers a wide range of entertainment. From museums showcasing traditional cultures and theatres performing local and world famous plays and shows to modern nightlife, concerts, and events: there is always something to do! Listed below are the museums and theatres that our city offers.

The Historical Museum is situated in the very center of Bishkek on the Ala-Too square. The museum has rich ethnographic collections of objects from the late 19th and early 20th centuries which include articles made of felt, wool, leather, and wood made by Kyrgyz artisans; and collections of traditional Kyrgyz embroidery, fleece and national dress, original women's adornments, and highly artistic horse harnesses. 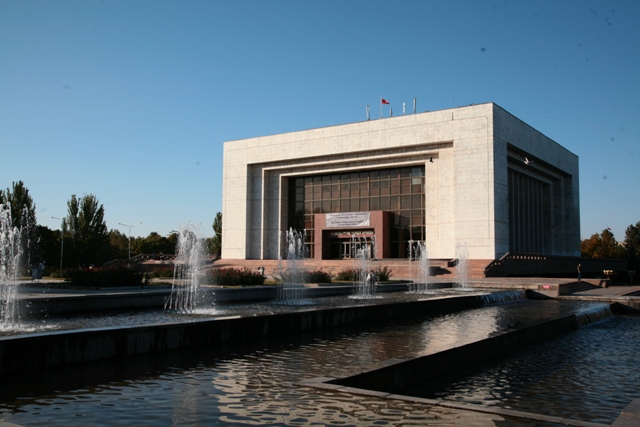 The Museum of Fine Arts - 196, Sovietskaya - Tue-Sun 09:00-17:00
Dedicated to Kyrgyz folk and applied arts; Russian and Soviet Art - the museum began as the State Picture Gallery and was located in St. Nicholas Church in Oak Park. The Church now houses the Gallery of the Soviet Artists' Union.

Frunze Museum - 346, Frunze - Tue-Fri 09:00-17:00; Sat-Sun 09:00-16:00
The museum traces the life and career of Mikhail Frunze - and what is supposed to be the house in which he was born and brought up is preserved on the ground floor (although there is some doubt whether this is the right house - it is typical of the period) - and there is an exhibition of the achievements of the city and Kyrgyz Republic during the Soviet period.

The Tinibek Sadykov Museum - Togolok Moldo - Mon-Fri 09:00-12:00 + 13:00-16:00
This museum contains some of the smaller works of the Kyrgyz monumental sculptor Tinibek Saykov, some of whose larger works can be found in the Philharmonic, The Matyrs to the Revolution at the corner of Prospect Chui and Sovietskaya and in Victory Square.

The Aaly Tokombaev Museum - 109, Chuikova - Mon-Fri 09:00-17:00
Tokombaev was a famous Kyrgyz akin (bard), poet and composer, and his house has been turned into a museum dedicated to his life and work. He helped to standardize written Kyrgyz using a modified Cyrillic alphabet. There is an exhibition dedicated to the exodus of many Kyrgyz to China in 1916 following the Urkun uprising against the Russians. (There is a statue of Tokombaev to the South of the Fine Arts Museum).

The Gaspar Aitiev Studio - on the corner of Tynystanova and Chokmorova.
Aitiev was a painter and sculptor and the museum is housed in what was his studio and houses some of his work including landscapes, sketches in charcoal, and pastels and sculptures from driftwood.

Inaugurated in 1984 to mark the 60th Anniversary of the Kyrgyz Republic, sculptors from all over the Soviet Union were invited to submit pieces under the title "Peace and Labor" and their work was exhibited in the park. Many of the metal pieces, including a bronze bust of Yuri Gargarin, have since disappeared - plundered, stolen for their scrap value.

The Zoological Museum - 78, Pushkin Street - Mon-Fri 10:00-17:00
Contains displays of taxidermy (reptiles, birds, mammals, invertebrates), native to Kyrgyzstan - and some more exotic. There are also some live reptiles. The building, (Friendship House - Dom Druzhby), was the first seat of the Republican government built by the Interhelp volunteers in 1927, (there is a time capsule in the cornerstone), but when the Supreme Soviet building in the old square was completed, this became a Historical Museum.

The Ala Archa National Park Museum - a few kilometers inside the park - The two story building houses the administration offices of the park and has a room dedicated examples of the wildlife found here and around Issyk Kul.

The National Library - although not strictly a Museum, the library has over the years since it was founded in 1934 become one of the major repositories of culture in the country. It moved into its present home on Sovietskaya in 1984 - to mark its 50th anniversary. The library collects copies of all literature published in the country, as well as a variety of publications from other CIS countries and further afield.

Kyrgyz State Philarmonic is situated on Chui Avenue. There are two concert halls featuring classical, traditional Kyrgyz, and pop concerts and a variety of shows.The Philharmonic was built in 1980 and is the setting for classical, modern simphony and Kyrgyz orchestral and traditional musical performances. The gigantic statue in front depicts the 1000-year-old hero Manas astride his magic steed Ak-Kula, slaying a dragon. 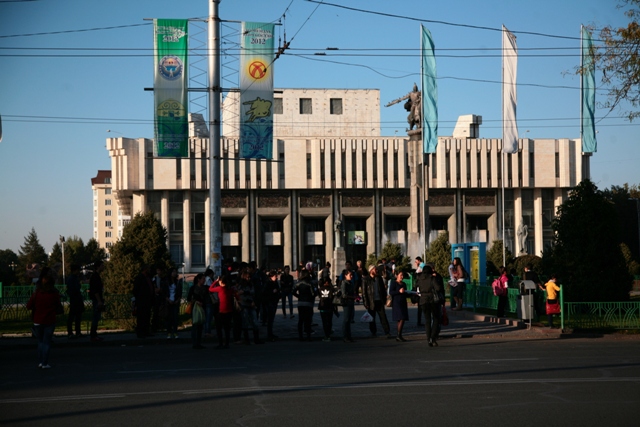 Bishkek City Drama Theatre
Chernyshevsky Library between Theatre of Opera and Ballet and Russian Drama Theatre
A small, intimate theatre with a company performing a range of local and international plays - performances are in Kyrgyz or Russian and often international.

Puppet Theatre
Sovietskaya-Michurina St.
Performances on Sundays at 11:00am.

The Conservatory
115, Jantosheva St.; Tel.: 479542
Concerts by students and professors.